Into the FashionTT Metaverse: A User’s Experience - FashionTT Skip to content

Into the FashionTT Metaverse: A User’s Experience

On March 25th 2022, I woke up excited to attend the Trinidad and Tobago Fashion Company Limited (FashionTT)’s Virtual Fashion Trade Mission and Expo! I headed over to fashionevent.virtex.in where I seamlessly logged into the virtual platform by providing my name and email address. Unsurprisingly, I was greeted by the amazing sights and sounds the platform had to offer. With sweet Soca music (Mr. Machel Montano himself!) playing in the Lobby, instilling a sense of Trinbagonian pride in myself, I began exploring the various aspects of this fashion metaverse – the first of its kind in the Caribbean!

The Trade Mission brought together designers, manufacturers, service providers and buyers all under one virtual roof. My first stop was the Fashion Showcase, where I got to listen to the showcase speakers discuss the growth of Trinidad and Tobago’s fashion industry and its position on the world stage. In her opening remarks, Lisa-Marie Daniel, General Manager of FashionTT, announced that the 3D platform would be available online for the next six months! I was pleased to learn that I would be able to share this experience with all my colleagues. Following, a compelling feature address was given by Senator the Honourable Paula Gopee-Scoon, Minister of Trade and Industry, who noted that during the fiscal period 2016 to 2020, “the Garment Industry of Trinidad and Tobago generated exports of over $97 million (US$14 million).” Moreover, she highlighted the fact that seventy-five percent of the top tier designers in FashionTT’s Global Value Chain (GVC) programme have female owned and operated businesses! This insight into Trinidad and Tobago’s fashion industry was truly inspiring and encouraging. 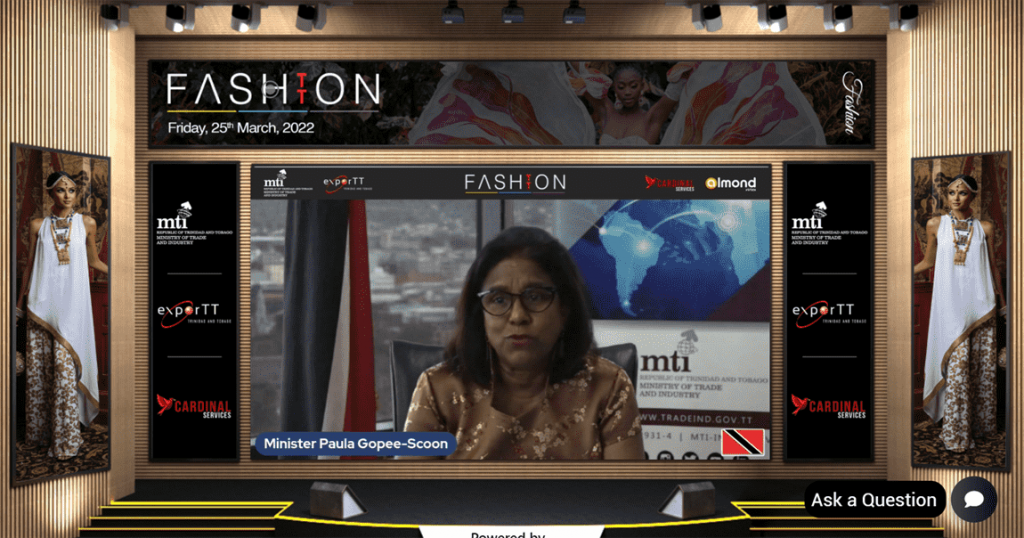 I especially enjoyed the panel discussions near the end on Caribbean Fashion/Aesthetic and the global fashion industry. In particular, Professor Andrew Ramroop and Richard Young shared a similar sentiment that resonated with me – that for Caribbean designers to be successful, they must be true to themselves and their origins! As Prof. Ramroop put it, “We gotta distinguish ourselves in some way, rather than follow what others are doing… it is to create a trail for others to follow.” This was echoed by Young when he stated, “Our uniqueness is what we need to put to the front, through cultural confidence, to position us on the world market… the way for the world to take us seriously is not to join the bandwagon of what exists, but to add value, to add to the template…”

After, I returned to the Lobby which mimicked a real expo hall. Easy, one-click navigation was surrounded by beautiful images of models decked out in designer pieces shuffling on the screen. The platform proved to be highly interactive, user friendly and, of course, full of vibes!! From there, I headed to the Designers section to explore the 11 designers featured at the trade mission – The 1ndividual Aesthetic, The Cloth, Meiling, Charu Lochan Dass, Heather Jones, J. Angelique, Claudia Pegus, The Hideout Clothing, Genesis Swimwear, Neha Karina and Ecliff Elie. When I clicked on any of the 11 designers, I was taken to their personalized, interactive page. From there, I was welcomed by a reel of images showcasing their work, and I had the option of enlarging any of the images to inspect the finer details of the designs! I was also able to explore their work through video content and brochures provided. More importantly, however, I had the ability to request a meeting with the designer, as well as be able to chat with them in real time! The platform also made it easy to keep track of any meetings I scheduled under the My Meetings tab. Networking had never been made easier! Truly immersive, I felt like I was attending an expo in-person, being able to directly interact with sellers straight from my home and with a click of a button.

The joy of exploring the FashionTT Metaverse was not just felt by me alone; such feelings were also evident in the testimonials provided on the trade mission and platform. Under the Testimonial tab, I was able to hear from the likes of Her Excellency Analisa Low, Ambassador of the Republic of Trinidad and Tobago to China, and Dr. Sabeeta Bidasie-Singh, CEO Cardinal Services, based in Houston, Texas. I felt connected to people all across the globe who were participating in the virtual fashion trade mission, and I knew for certain that FashionTT had created something deserving of international recognition.

While the pandemic has brought immense tragedy all over the world, it has also forced us to discover innovative ways to do things, including developing virtual spaces for events. The shift from ‘in-person’ to ‘virtual’ has made attending expos, conferences and concerts extraordinarily more accessible, allowing anyone with an internet connection and computer to go places they never would have previously. I am impressed by FashionTT’s approach to this new virtual landscape. The Caribbean often lags behind other regions in terms of digital transformation, but FashionTT proves that anything is possible. As Prof. Ramroop would put it, they have created a trail for others to follow. I look forward to the future and where this virtual 3D platform takes FashionTT next!